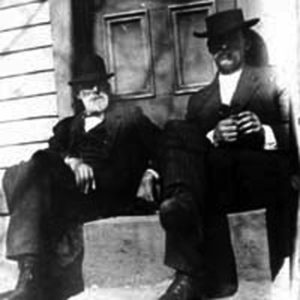 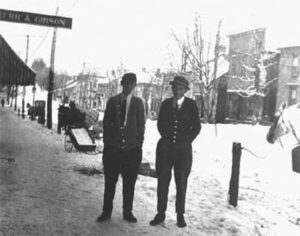 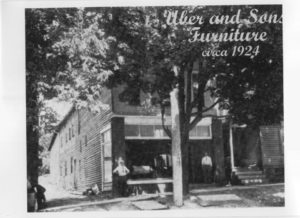 1805
Peter Uber constructed the house and barn somewhere near 1805. By the time of the 1835 census, it had been registered as an inn. Peter’s son William Henry Harrison Uber served as the barkeep in his father’s inn.

In 1850 Peter and William added the existing storefront to the original house deconstructing the barn for building material. The rustic beams from the 1835 barn remain in place in our brewery today.

Soon thereafter, Peter and William went from innkeeping to cabinet making and by the time of the Civil War, to coffin making. Apparently business was very good and it soon occurred to the Ubers, in their dead reckoning, that undertaking was the next logical step. Soon their shop became “Uber and Sons Undertakers and Furniture Dealers.” The business flourished, even if their customers did not.

Sometime in the 1800s the business and the building were passed on from William to his son Carrol. Under Carrol’s leadership, the business continued to prosper. It was enlarged to its present size somewhere around 1920.

Elton North Uber – Carrol’s son – carried on the family tradition until his retirement in 1974. After Elton had the last funeral, Edward Uber continued the family business as a furniture store for 20 more years.

1998
In the spring of 1998, Jodi and Bob McCafferty fell in love with the old storefront and immediately started renovating. They personally rebuilt the structure from the foundation through the roof with gathered local hardwoods and recycled on-site materials. Jodi and Bob McCafferty handcrafted the hardwoods, as well as black walnut and curly maple left from the Uber’s furniture store, into the custom feel found only in Slippery Rock, PA.

When Jodi and Bob opened the doors to North Country Brewing Company in 2005, they couldn’t have expected the support and demand for good craft beer that Slippery Rock had. Over the years, our brewpub has featured over 100 different types of beers, ranging from traditional reds and stouts to more outlandish and experimental brews such as bacon-flavored brews and chai tea infused ales.

North Country Brewing Company has always thrived on the belief of Our annual Brewfests have raised over $50,000 for Slippery Rock Development, which has helped maintain Slippery Rock’s appearance and upkeep. Jodi and Bob coordinated and funded “Polish the Rock,” a yearly community clean-up day in which local business owners, residents, SRU students, and faculty cleaned Main Street to include fresh mulch in the planters. NCBC invited all volunteers for soup and beverages for their efforts.

2013
Over the years, Jodi and Bob saw such demand for their brew that they decided to open a production facility. North Country Canning Company officially came to be in 2013 and has been producing and canning North Country’s most popular brews. Since its inception, the production facility has shipped beer to every county in Pennsylvania, Ohio, and will soon offer its wares in Florida.

In 2013, the McCaffertys found themselves at a crossroad: The Harmony Inn, which is the establishment where the two met, was up for sale. They could not pass on this opportunity, so Jodi and Bob purchased the inn and took it under the North Country umbrella. Since reopening the establishment in September 2014, The Harmony Inn has continued to offer the same quality and tradition that patrons have always come to expect.

As we pass our tenth anniversary, who knows what stories have yet to come to be for North Country Brewing Company? All we know is that it has been an interesting ride coming to this destination, and we look forward to sharing the next ten years with you.

Over 15 Beers on Draught

All Events Listed are
7 PM to 10 PM
unless otherwise noted.